A Lesson by a Famous New Yorker 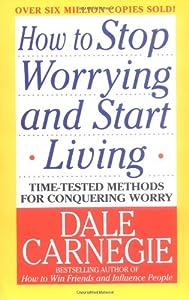 Cover of How to Stop Worrying and Start Living

If you worry at times, or if you get tired, this lesson is for you.

The New Yorker I am referring to studied people such as Winston Churchill, John D Rockefeller, Eleanor Roosevelt and Henry Ford. He found they all did one thing:

They rested before they got tired…..that is the one lesson that stuck with me.

How did they do it? By taking naps, or in Churchill’s case, he slept before supper for one hour. This enabled him to do extra work at night. With one hour of sleep before supper and then 6 hours of sleep through the night, Churchill felt more refreshed than he would have if he had slept for 8 hrs.

In his book, “How to Stop Worrying and Start Living”, Dale Carnegie (The famous New Yorker who also happens to be one of my top role models) mentions that a Harvard cardiologist told him that the heart rests more than it works.

It contracts for only 9 out of the 24hrs; the rest of the time the heart rests.

Next time you feel a sense of fatigue, think about this advice. Perhaps its time to rest before you get tired. And when we are tired we worry more. We develop imaginations that are not healthy, good or positive. We fret. We get agitated. We get disturbed inside.

So don’t get tired. But if you do, learn the same lessons Carnegie learned from other famous and influential people who lived their lives by example: rest before you get tired.