Take your children outside 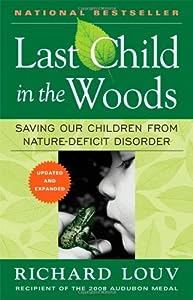 The organization Children and Nature has done a wonderful job of raising the awareness of how we as a society can benefit when we allow our children to get outside more often simply to play and explore their environment. In Canada, Robert Bateman launched a program in 2000 which encourages families to use nature in order to become more creative (www.gettoknow.ca)

Richard Louv, author of “Last Child in the Woods”, was the keynote speaker at a major pediatric conference in San Francisco last year. Louv coined the term of Nature Deficiency Disorder (NDD).

Louv laments the fact that too many parents neglect taking their children out in nature. They often are too tired; the children may be over-committed with homework, extra classes, organized sports; or parents simply get tired of children constantly pushing back when their screen time is limited. When children complain of being bored, instead of sending them out to play in nature, they are given electronic devices to keep them occupied. This comes at the expense of allowing simple free play.

Louv observes that some parents are “helicopter” parents—they hover over the child all the time, making sure he is safe. They won’t allow the child to climb a tree in fear that he may fall or break his arm. These bubble-wrapped children never are allowed to explore nature on their own; the parents fear that the child may get abducted (data show that the number of child abductions have actually gone down over the past 20 years)

The ideal parent may be the “hummingbird parent” This parent allows the child the freedom to explore on her own, but once in a while the parent comes back and checks up to make sure the child is safe.

The biophilia hypotheses as put forward by E O Wilson, a Harvard-based researcher, make the case that we are genetically wired to connect with nature. We are meant to be exposed to fresh air, water, dirt and plants.

Much of the research on how nature improves the health of children center around mental health, asthma, obesity and cognitive development.

The health benefits to children of spending intentional time in nature include: an improvement in focus for children who have ADD, a reduction in stress, anxiety and depression, a reduction in the prevalence of obesity, lower blood pressure, and a lower rate of Vitamin D deficiency.

Unstructured free play in nature has been shown to benefit a child’s cognitive development and social skills. These children end up with better self-esteem and self-discipline when exposed to green spaces– even in inner cities. It has been shown when children play on cement or asphalt they get less benefits then being in nature.

The journal Ophthalmology published a study showing that outdoor activity reduces the prevalence of myopia (near-sightedness) in children. The authors found that children with the highest level of near work activity and lowest levels of outdoor activity were three times more likely to develop myopia than their peers who were outside more often ((Opthalmology,2008, 115(8) 1279-1285)

Children living in areas with more street trees were found to have a lower prevalence of asthma according to research published in the Journal of Epidemiology and Community Health (2008, 62 (7), 647-649) The authors of the study found that a tree density of 343 trees per square kilometer was associated with a 29% lower prevalence of early childhood asthma.

Dr Michael Rich, director of the Harvard-based Center on Media and Child Health (www.cmch.tv), observes that in the research literature on childhood obesity, the word “nature” is surprisingly infrequent. In contrast the problem of how media and total daily screen time contributes to causing childhood obesity is well documented. His argument is that more and more physicians should go beyond reminding families of the health impact of too much media exposure; they should actually prescribe more time in nature to families—especially for children with mental health challenges.

Dr Rich in a recent interview with the American Academy of Pediatrics made this comment: “Einstein reminded us that not everything that one can count counts, and not everything that counts can be counted”. His point was that although it is great to have evidence-based publications on this topic, it is common sense to get children back where they belong—away from excessive amounts of electronics and back in nature with their parents.